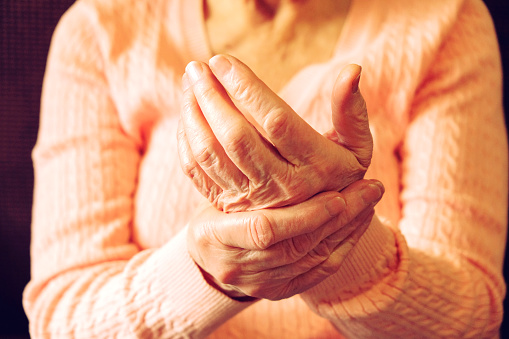 Historically known as rheumatism, Arthritis can be a debilitating ailment that can affect any joint in the body, and can be particularly bad in cold, damp weather.

Arthritis is itself a generic term, though today it is most commonly applied to three forms of the disease: osteo, rheumatoid and septic arthritis. All three have distinct characteristics but do most of their damage in the same place – to the cartilage that cushions our joints, allowing them to work smoothly without the bones grinding one against another.

By far the most common of these is osteoarthritis, so common in fact that 80% of people over age 50 will have some trace of it in their body. It is often due to ‘wear and tear’ of a specific joint or multiple joints, caused by repetitive overuse. The result, in a severe example, is bone rubbing against bone, which can cause swelling and pain.  In many of these cases, the disease will never progress beyond minor symptoms, but in some can be severely crippling.

The onset of rheumatoid arthritis occurs earlier than osteoarthritis (in children it is called Still’s disease) and its effects can be much more widespread. Again, the joints are the principal target, but there can also be a variety of systemic symptoms, among them anemia, fatigue, swelling of blood vessels and inflammation of the pericardium, the membrane surrounding the heart. The disease occurs in no more than three percent of the population, with women three times more likely to be affected than men. Rheumatoid arthritis is often genetic in nature, and one will see multiple generations with this disease in their family history. It is often bilateral in nature (affecting both sides of the body), whereas osteoarthritis often only affects one specific joint, and is unilateral (one side of the body).

Arthritis can take many forms – septic (bone infection), psoriasis (a skin disease), ankylosing spondylitis (a crippling spinal disorder that afflicts men in an 8:1 ratio over women). In all its forms, arthritis is progressive and degenerative; it can be slowed, even stopped, but not reversed. Cartilage, the principal target, has almost no capacity to regenerate itself. Once damaged, it stays damaged.

Early detection is therefore critical. The diagnostic tools are blood tests, x-rays, and family history. Although drug treatment can relieve symptoms and even slow the progression of the disease, arthritis’ pharmaceuticals are prone to diminishing effectiveness and serious side effects are a risk. Diet modification for example, can be ideal for reducing inflammation in the joints. Avoid or reduce foods in the nightshade family of plants (potatoes, peppers, eggplant, tomatoes, and tobacco). Limit meat and dairy. Reduce gluten, citrus, sugar, alcohol, processed foods, corn, peanuts, and caffeine. Herbs – such as curcumin (turmeric), bromelain, and Boswellia are powerful anti-inflammatory botanicals, as well as the nutraceuticals omega 3 oils, glucosamine, chondroitin, and MSM. Acupuncture and massage therapy are great treatment alternatives as well. Hyaluronic Acid, the lubricating fluid found naturally within the joints, can be injected safely and effectively into an arthritic joint to help increase the stability of the joint, and reduce/eliminate pain for a significant period of time.

Since the cause of arthritis remains unclear, there is no sure way to prevent it. But regular exercise and a healthy diet can only help. And remember: arthritis often first appears at the site of an old injury. If you suspect that you’ve sprained or otherwise damaged a joint, get a diagnosis and treatment immediately. Although conventional medicine can help to treat the symptoms (pain, swelling, redness) of arthritis, other naturopathic treatments can look at the underlying root(s) of the inflammation (diet, gut health, allergies, blood deficiencies, etc), and thus look at a complimentary or integrative approach for the patient.