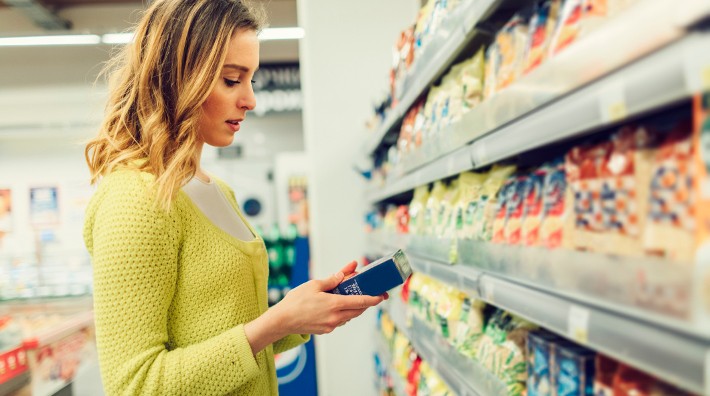 How long does it take you to do the weekly grocery shopping: 20 minutes, 45 minutes, two hours? If you fall into the latter category, I’d guess that you are one of those conscientious but wildly frustrated people who read the labels, trying to determine what food additives they are feeding themselves and their family.

Frustrated, because there are at least 1000 potential additives in our food, most of them man-made concoctions listed under a bewildering array of chemical names.

Their functions are equally various, ranging from bulking, thickening, foaming, gelling and glazing to raising, emulsifying and anti-caking. Some, like preservatives, anti-oxidants and acids serve a useful purpose in some foods. Others, such as colourings and flavour enhancers are purely cosmetic.

All food additives are supposed to be government-certified as safe for human consumption within maximum daily intake levels. Fine in theory, but less so in practice. In Canada and the US, we put no numbers on the labels but do require that the actual name of the additive be listed, not just a brand or generic term, such as food colouring or preservatives. Either way, names or numbers, the information – if you take the trouble to look it up on the internet – is likely to be rife with claims and counterclaims about health and safety.

Food additives are generators of big money and dirty politics, and nothing makes the case better than artificial sweeteners.

Other than sugar of lead, which was used by the Romans with fatal results, saccharine was the first artificial sweeter. Originally synthesized in 1879, it was later shown in lab tests to cause brain tumours, and eventually banned from foods in Canada in 1977. A US ban was in the works, but then headed off by an American Congress under pressure from food industry lobbyists. With sweetening power 300-500 times that of sugar, there were huge profits to be made, both from manufacturing saccharine and using it to replace sugar in dozens of different foods.

Aspartame (NutraSweet, Equal) was next up. Discovered in 1965, it was linked to possible brain cancer, and in 1980 a special US Food and Agriculture Administration panel recommended that it not be approved. Quick to the rescue, President Ronald Reagan appointed Arthur Hill Hayes, a friend of the food sweetener industry as the new FDA Commissioner, and ergo: Aspartame was approved in 1981.

While Aspartame remains the food sweetener of choice (along with Acesulfame K/ Sunette, Sweet One and Sucralose/Splenda), the battle of the studies continues, some claiming a link to cancer, others not. Some researchers go so far as to link Aspartame with the rise in the incidence of brain tumours in the US.

There’s a saying amongst writers that applies to food additives: when in doubt, leave it out. While abstaining entirely from food additives is a very difficult task here are some prime candidates to avoid:

BHA and BHT – antioxidants linked to cancer and banned in California and a number of countries.

Sodium nitrate – long used as a preservative in meats, turns with cooking into the potent carcinogen, sodium nitrite.