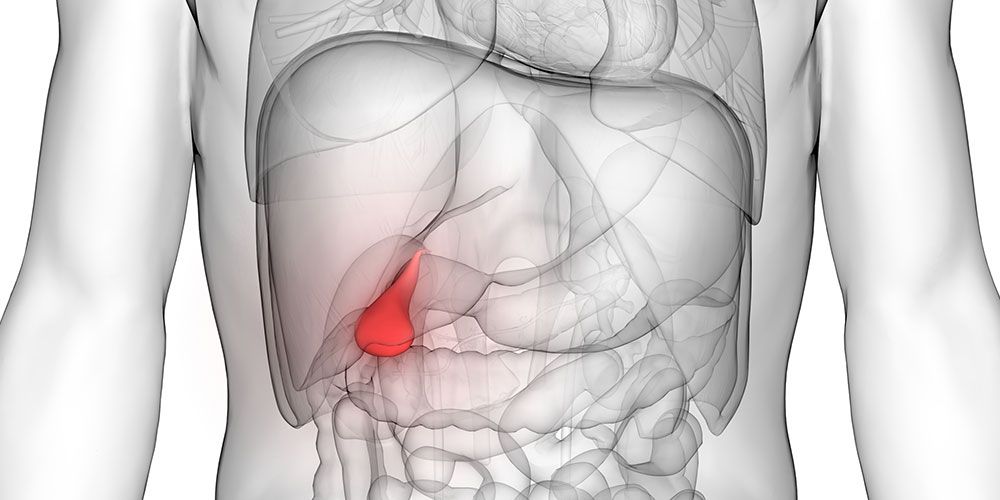 Among the growing list of medical conditions attributable to our high-fat western diet, there is no more obvious case of cause and effect than the stones that form in the gallbladder.

Roughly the size and shape of a pear, the gallbladder lies under the liver, where it stores bile, a strongly alkaline solution that is produced in the liver and released into the digestive tract to break down fats.

Gallstones form in the gallbladder when there is too much cholesterol entering the liver in the bloodstream, usually because of obesity, fatty foods, low dietary fiber (fruits, vegetables and whole grains) or stress – a large cause of many chronic disease these days.

As the dissolving power of bile is overwhelmed, hard yellowish-green accretions of cholesterol and calcium take shape, ranging in size from a grain of sand to a golf ball. If one of these larger stones becomes lodged in the system of ducts that carries bile from the liver to the duodenum (part of the intestine), serious damage can be done to the liver, gallbladder or pancreas. If left unattended, infection, cancer and even death can result.

The symptoms are distinctive: a sudden onset of pain under the bottom rib on the right side (hence the term gallbladder “attack”), often after a heavy, fatty meal. Jaundice – yellowing of the skin or whites of the eyes – is also indicative. If you suspect you have a stone, get medical attention immediately.

Gallstones are more easily prevented than treated. In some cases, chemicals or concentrated sound pulses will break up a stone. But surgery is by far the most common remedy, performed about 350,000 times a year or more in North America.

Almost invariably, the entire gallbladder is removed, rather than just the stone, even if the gallbladder is still functional. This, I believe, is not always advised, but can be necessary in certain cases. Although the gallbladder is considered to be a “non-essential” organ, it has the capacity to contract and expel a large quantity of bile into the gut on demand. Without it, the intestinal tract only receives what the liver can store and produce at that moment, which may be too little for effective digestion.

Gallstones are heavily influenced by genetic inheritance. Roughly 70% of the First Nations population over age 30 have the condition, while only 10% of African American women of the same age develop stones.

Simply being female, no matter what your racial extraction, makes you two to four times more susceptible than males, possibly because the female hormone estrogen suppresses bile production and increases the synthesis of cholesterol.

Preventative supplements include lecithin, fish oils, folic acid, vitamins B12, C and E and herbs such as milk thistle, turmeric and dandelion, which are called cholagogues, because they stimulate bile production in the liver. And, important as any, drink plenty of water.

Stay healthy by eating well, getting regular exercise, allowing for proper sleep hygiene, and reducing stress levels, and hopefully gallstones don’t become part of your medical history. But if they do, speak to a Naturopathic Doctor about a proper dietary regime to strengthen your digestive system, and allow your body to digest fats without a functional gallbladder.